When I was a teenager I wrote a letter to Billy Graham.  What happened next made a lasting impression on me.

I was not raised in a Christian home.  We didn’t attend church and we didn’t read the Bible.  Becoming a follower of Christ when I was teenager dramatically changed my life.  I remember feeling like a sponge soaking up God’s word.  I saw the world differently, as if a blindfold had been removed from my eyes.  Instead of being shy, I was bold and began witnessing to everyone.  I started a Bible club on our high school campus that attracted 100 students to our first meeting.  I was growing and on fire for the gospel.  It was the 1970s.

That’s when I wrote Billy Graham.  I shared my story and some of the opportunities God was giving me to be a witness.  I asked specific questions and sought guidance.  It was a simple hand written letter from a teenage boy in Kentucky.

What I received in response to my letter was more than I had expected.  One of the trained counselors sent me a two page single-spaced typed letter answering each of my questions, offering suggestions for my continued growth, and providing encouragement.  Included with the letter was two books.  One of the books was “The Art of Personal Witnessing.”

I cannot overstate the encouragement that gave me.  I devoured those books and kept the letter.

Today I better understand the great practices of the Billy Graham Evangelistic Association and know that my experience was not unique to me.  His ministry has done for others what it did for me for decades.

What was true then remains true now – the immense respect and appreciation I have for Billy Graham and the ministry he led.  The response to my letter showed his heart, because the actions of the BGEA expressed his heart and vision.  My letter did not include a donation.  Their response did not ask for one.  I was simply a young Christian wanting help and they gave it.

When I learned that Dr. Graham had moved to glory I remembered my letter.  I felt a mixture of joy and sorrow.  Even though I only met him once, I loved him.

I write this in honor of a brother in Christ. 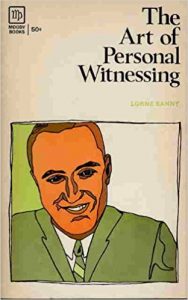