Phil, our chairman of deacons, had major surgery Monday and will be on a medical leave from work for several months while he recovers at home.  I just spoke with Debbie, his wife, and Phil is doing well.  There’s a long road in front of him, but he is a fighter and he loves Jesus.

When I spoke with him Sunday night he shared with me what happened to him Sunday at church.  One of our deacons stopped him in the lobby, put his arm around him and said a prayer.  Phil then went to the men’s rest room where another brother stopped him and said a prayer.  A week ago we ended our deacons’ meeting by having Phil sit in a chair as we surrounded him with a circle of prayer.  He was blessed by these and other prayers offered on his behalf.

Too often we tell someone we’ll pray for them and then forget to pray.  We mean well, but we don’t follow through.  I learned a long time ago that often the best thing to do is exactly what those two brothers did with Phil Sunday morning.  Just stop what you’re doing and pray with another person right where you are.  It doesn’t have to be a long prayer to get God’s attention.  Short prayers can be powerful and moving.  If you’ve never done this, try it.  You and the person for whom you’re praying will be blessed.  It can also be a witness to someone who needs to see God’s people in action loving one another.

Prayer doesn’t always have to be organized and scheduled.  Sometime the best prayers are prayed in the moment.  Believe that God has you where you are at every moment for reasons bigger than just being there to do whatever you showed up to do.  Be sensitive to the promptings of the Holy Spirit and allow Him to direct your heart and your thoughts.

Let’s keep praying for one another – even in the hallways and restrooms of the church.  Let’s also continue praying for Phil. 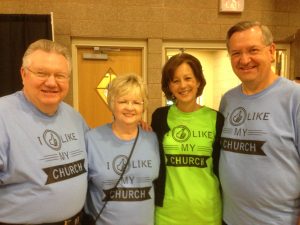 Brother Phil and Debbie with Monieca and Me